Over the past month I've been working on a few projects, one of those being my second chapter book. I don't have much time to talk about these but wanted to finally post them on my blog. I also figured now would be a good time to finally figure out how to make an animated GIF to show my process, something I've wanted to do for a while but never took a minute to figure out. Turned out to be much easier than I thought it would be! SO above is Gif showing my process for one of the images and the final three drawings below. They still aren't 100% done as I have to make tiny adjustments but none the less I'm quit happy with how these turned out an hope I get more projects like this. I was very surprised to find out that these graphite drawings took almost as much time as  a finished oil illustration (probably because of how much time was put into designing the various creatures and settings and the extra work put into preliminary shading of sketches). These are for "The Silver Shuttle" which I have posted the cover illustration process for already in a series of posts. 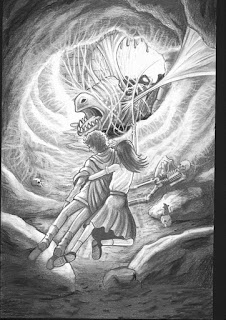 The image above is a scene inside a tunnel inhabited by a worm creature. I won't go into all of the specifics of all of these (you'll have to read the book!). For this image I will say that the walls of the cave at this point in the action have been covered by tons of glowing strings which have also wrapped around the worm causing it to decay. I spent a lot of time trying to figure out how  to best draw a dark cave as though it was being wrapped by glowing strings.Unlike paint, I knew I wouldn't be able to just add more white on top later if needed but need to figure out the best way to preserve any whites I needed. Keeping in mind erasing can only go so far and can effect later pencil work. I did experiment with painting on top of the graphite and photoshop ideas as well but really wanted to stick with graphite if possible. I was heavily relying on the work of Chris Van Allsburg as he is really the only really amazing graphite artists that I know of off the top of my head. He's quit famous for getting spectacular glowing effects in his expertly rendered graphite drawings. 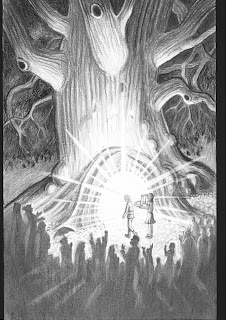 For this image, one of the more difficult aspects was trying to show detail in the main two characters heading into the tree, while keeping the main focus on the enormous tree. I needed to pull out far enough to see the context and to see a good amount of branches while still being able to see those two main figures. 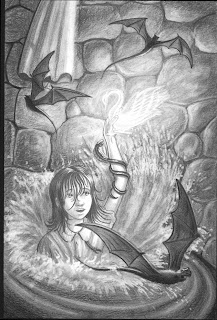 This last image had all kinds of difficulties for me.The most challenging aspects are the swan shaped "lamp" which had to be glowing and the explosion of water surrounding Annie. In the end I didn't worry as much about whether her shirt and skin and rocks look wet as this wasn't intended to be a photo realistic depiction but I did struggle through those things as it can be hard for me to let those things go sometimes and to know exactly how much information to include.Instead I focused on the main action, imagined what the creatures wings would look like with the light shining through the thin webbing,  and really focused on showing the details in the swan while still having that glow.
If the image had just been a character standing ina   well with a flashlight I may have spent more time differentiating the rocks with their own characteristics, shapes, adding lichen, tree roots, etc. I may have had stuff floating in the water, had her reflection etc. but for an image like this with so much other action I needed to zone in on the really important aspects to favor telling the story rather than overwhelming with too much info. The good thing about chapter books is that they have plenty of room to elaborate on all of those details to help the readers mind go to work in filling in all the little things that can't be fit into one single drawing.
This book should be available before Christmas if all goes well with publishing. Very excited to have this one sitting on my shelves as I truly enjoyed reading the story, love the themes and imagery involved along with the settings. I'll be sure to announce it's arrival on Amazon.
Posted by Matthew Gauvin at 6:57 AM

Thanks Daisy! Now we have graphite as a possible alternate option for us on your next book and we have some sense for how that might look. I'll send you some larger resolution versions of these soon so you can get a better look at them and compare to the ink illustrations.