This past week I was at the Laundromat keeping my fiancé company when the vending machine called my name in no uncertain terms and with a very distinct glow, faintly trickling past my right eye. I vigorously walked in the direction of the faint hummm and was encountered by these bizarre colored disks in a red package with large white letters. They were small, strange, hard and shinny with a large white letter on each of the disks as well. I once saw E.T. Eat a substance similar to these on TV., back when I still wore those umpa loompa jammies with the zipper down the front and slippers sewn onto each leg. Yet those were very different than these. I knew these couldn't belong to him because the letter on them was an "S" and not an "E" or a "T" . Confounded I dumped some out onto the table in front of us and was only slightly surprised to see them roll around and form themselves into a crop circle sort of pattern before my very eyes. I ate one and then another. They kept making their way from the bag, to my stomach with such ease but not without a good deal of chewing along the way. That was my favorite segment of the journey as each bunch, when chewed, would release an assortment of fruity flavors upon contact with my tongue.


I eventually realized the bag would soon disappear and no trace of the flattened spheres would remain as proof of my encounter. Of course saving some aside was out of the question as each subsequent sample called out in a distinct vocal pitch increasingly fine tuned to my inner longings for fruity substances. Thinking quickly on my feet . . . I got nothing. But then Barbie told me I should do a painting of them. And so after about fifteen minutes of moving the pieces around, looking through a viewfinder, I came up with the absolute best composition I could possibly muster under the circumstances. Then Barbie picked them all up and rolled them onto the table top, like a pro at a craps table in Vegas, and I painted them!

So it is without further ado my dear blog readers, facebook friends, fans (well it sounded good), and family members that I present to you this 5"x6" watercolor rendering as proof of the alleged encounter with Martian space disks. Take it or leave it as you please. It is my contention that these colored disks are in fact sent from Mars in an attempt to search out and gather information from among the most astute and learned of all humans (clearly their navigation software is a bit glitchy) on the planet earth in an attempt to learn our strengths and weaknesses, so that the whole of Martian kind might stand some small chance against us in the ensuing war over their home planet. You've been warned! 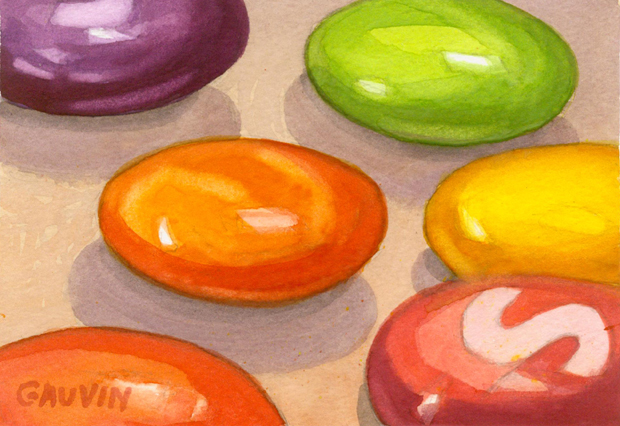 Posted by Matthew Gauvin at 7:08 AM

I was wondering where these strange notions came from!!! I intended to just post the painting and all of a sudden all of these weird thoughts started pouring out of me!!! By golly I hadn't even made the connection between the skittles and the woman starign at us!!! She's one of them!!!! Perhaps her eyes were videotaping us. LOL . And all that time I just figured she wanted one of my skittles,LOL.