For part one, in which I show the initial steps for designing this cover, click HERE

In the first post on this cover I showed some of my thumbnail sketches and rough draft sketches. This first image below shows where that last post left off, with the rough drawing on the left. On the right I've included a revised drawing which fixes the facial features and removes the globe in the background while tightening up other aspects of the image. 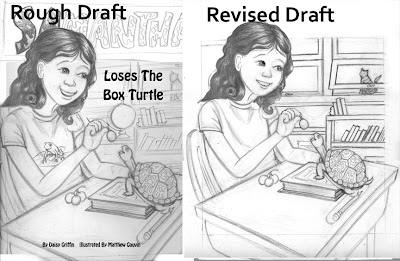 Then i did some quick color samples with about four different color schemes for the background illustration. We initially decided on the option below with a dominantly cool temperature color scheme, purples and blues. I threw in some initial rough text ideas but we eventually decided we needed the cover to be  a bit more friendly to boys. 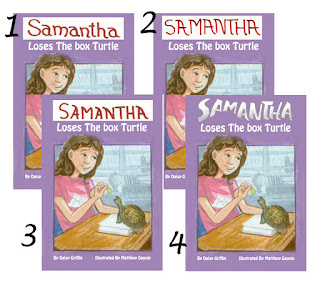 So from there the client liked warmer colors in the background illustration and it was a matter of trying to find a new color for the surrounding cover layout.

Throughout the whole process I sketched ideas for the title font, which we intended to be hand drawn. A lot of this felt repetetive but quit necesary. I was trying to invent my own font and wanted to get things to feel right for this particular book while also having the letters themeselves work together as a unit. It's not as easy as typing the words into photoshop and trying a bunch of different fonts in a matter of minutes. I have no training in graphhic design or text design but often enjoy trying my hand at it. With this book I was a bit frustrated because I had to create a text that would work for all the books in this series of "Samantha" books. SO I kept having ideas for the text that woudl fit this particular book but wouldn't work for the whole series. I also still have no idea what animals are in the rest of the series. 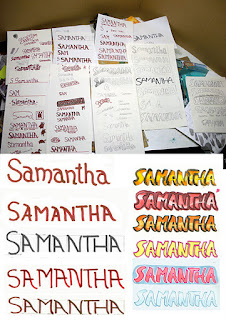 I did also try some computer fonts and actually started to like a couple of them but the client was drawn to an earlier hand drawn option.

So for our final font we agreed upon the one below.

I then took this basic font and tried various shading and colors on the font itself and paired those with our chosen color sample and cover layout color. This gave us a really good idea of what the final cover would look like.

Now the final watercolor painting. Some of these pics are taken in low light and the final product was scanned and further tweaked in photoshop. 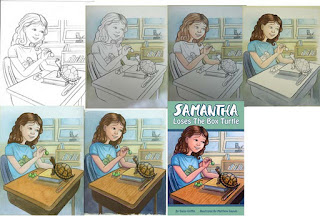 The final product is now available on Amazon for the kindle and other e-readers. Just click the link on the left side of my blog! 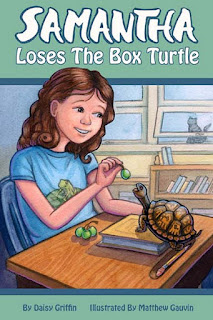 Posted by Matthew Gauvin at 7:47 PM