Samples from my Current Book in Process

(CLICK ont he images below to get larger views) I finally have some proof that I have been busy working on a new book over the past six months! Below I'm posting a bunch of images taken from some of the process of the new book. This book will be published by Wind RIdge Publishing in Vermont as soon as the illustrations are done. First up is the Character turn-around of the head for one of the main characters in the book.

Below is a character lineup of all of the characters in the color sample stage where I got a feel for how the faces would be painted and the colors of their clothing. 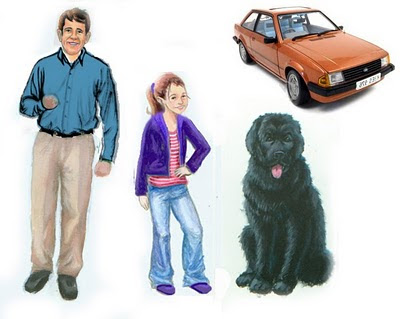 Below is one of the spot illustrations from the book. Not 100% done yet but close. 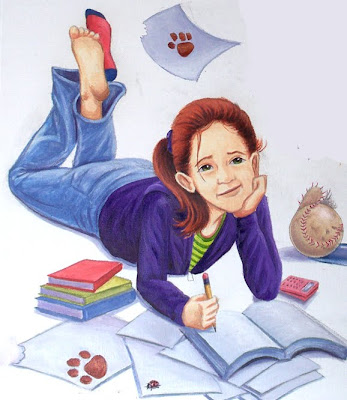 Below are a couple of the earlier illustrations in the book, also not 100% done yet. The faces in these are just rough lay in and will be fixed later. 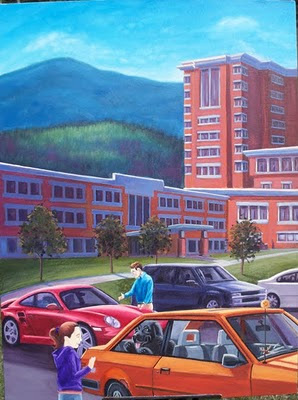 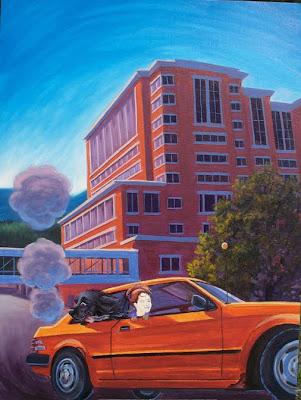 Below is a close up of the dog character (Jake) as he sticks his head out the window and gets a good look at the car wheels. 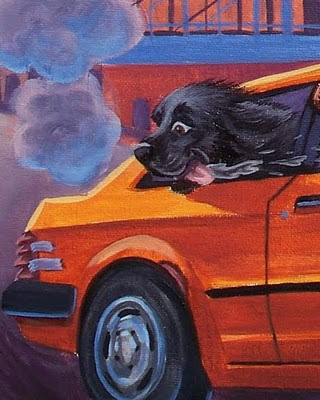 Below is some of the process work for one of the illustrations. I've got some character sketches, background sketch, and one of the color samples for the scene. 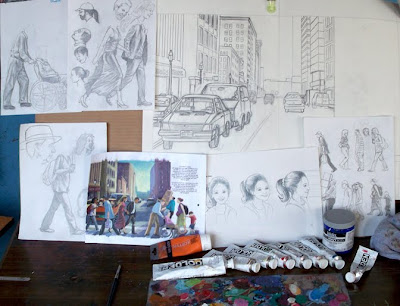 I am finally getting around to posting this full length video of the book reading with illustrations and a bit of animation and noises mixed in. Enjoy!

Posted by Matthew Gauvin at 12:45 PM No comments:

Wow! Has it really been so long since my last Post? Sorry, I've been doing a ton of work with my current children's book and still marketing my previous book. I finished off the longer video for that book a while back but never had a chance to uplaod it to this blog.
I've had a ton of ideas for topics I want to blog about but they are all quit time consuming ideas to put together. For today I decided to lay out my observations on the color grey as seen in the natural outdoors and as effected by light and shade. A friend of mine used to use black and white directly from the tube to make his greys for roads, concrete, metalic objects etc. He would often even make large areas of color in one uniform tone and hue across an area of space in his images. I'm not saying that is necisarily a bad thing as he did get many comments of approval of his art. However in my own observations I've noticed that this sort of application of color is often not true to nature. In the real world colors and surfaces get lighter as they recede in space and they tend to get cooler as they recede. Shadows will also be cooler than areas hit by light. You can get a good representation and create the appropriate value and contrast to form objects in an image just by using a monochromatic color scheme and even just with black and white. However I have found that my children's book illustrations are enhanced by exagerating colors.

Below are a few photos with concrete, sidewalks, pavement, roads etc which are generally thought in the mind to be just plain grey. In the center of the images I have extracted bits of the "greys" from the surrounding image to make it easier for us to see exactly what colors are in those greys. Things that would effect the colors are the time of day, the amount of light, the source of light, nearby objects which bounce color into the shadows etc. 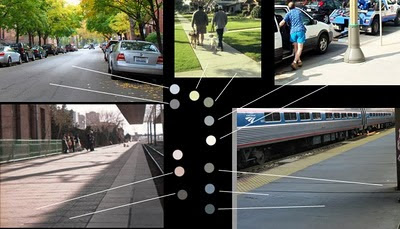 Below is one example of one of my color samples of an illustration I will be painting soon. I did a number of samples for this and a couple just went with various values of grey worked from black and white. That may have worked fine for some applications but both the author and I agree that it just won't do for our children's book as this image would seem too dull in relation to the other images in the book. The sample below has a grey interior to a car which I have infused colors into and yet still read as grey in the overall picture. You can get these kinds fo greys by mixing complementary colors together and adding white. I wanted the areas nearest the sources of light (windows) to be warmer and the darker and deeper nooks and cranies take on more of a purple hue. 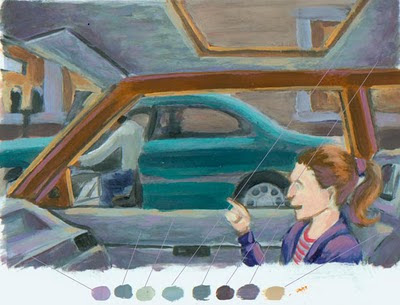 The image below is another image I'm working on for the same book as the above image. I do still have a lot I want to work on for these grey areas but I think this image will still work to get my point across. To the right you can see some areas I cropped out of the image and then crystalized in photoshop to help see the colors in the greys. In the concrete oning above the doorway, my goal was to have the area be dark enough to suggest not much sunlight is getting under there, and yet I also wanted to have some reflected light from the building effecting the color of the concrete. Then just to tie things in a bit better i decided to take some of the purple from below and work it into the top of the image. The concrete walkway admitedly overdoes the purple and I do plan to desaturate that. I don't want it to compete with the girls sweater and it is also currently popping off the canvas. 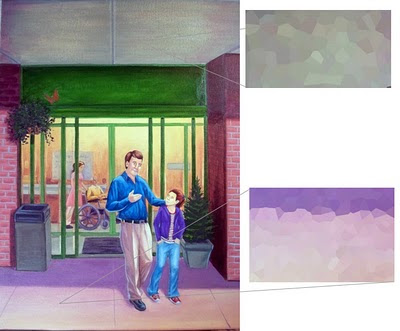 This last image comes from my previous book. I did about five or six color smaples of this image having bluer tones and greener tones in the concrete. In order to tie the whole image together, the author and I decided on the below color scheme. The color scheme in this image is quit warm with mere accents of cool color making the warms dance. I treated this concrete almost the way you would treat a water scene in which the sky colors are reflected onto the water top. A grey made with black and white would probably look great but I feel the colors I used below have more to say about the mood and atmosphere I was trying to achieve than black would be able to accomplish. 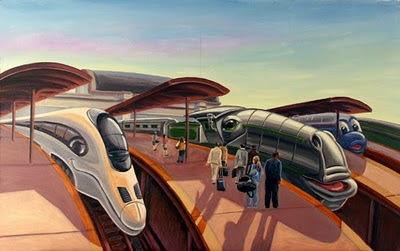 Posted by Matthew Gauvin at 10:46 AM No comments: