In progress illustrations
A change in sky color

As I'm in the process of writing up a newsletter I figured it's about time I put up the cover for my newest children's book "A cloudy Day" so I can link to it. This is just my own text layout as I don't have the final version of the cover available to me at this point. Finishing off the final two spot illustrations for this book tonight so it can head off to print soon! 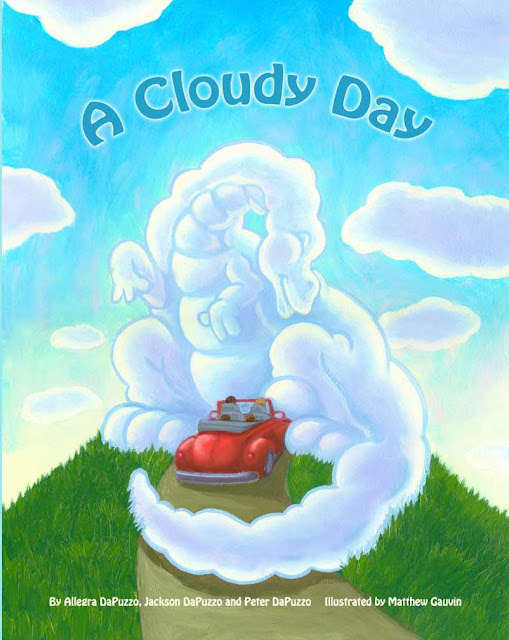 I'm pretty sure I finished the cover for the second book in the samantha series today. Just in time to announce the kickstarter campaign for the first book. The goal is to be able to raise $500 to use towards costs associated with printing and promotion of "Samantha loses The Box Turtle" as a paperback book. It's currently only available as an e-reader and has done quit well with some requests for hard copies of the books. Check out the kickstarter campaign page to learn more! 16 days to go!http://www.kickstarter.com/projects/2016518480/samantha-loses-the-box-turtle

The cool thing about supporting the printing of this book through the kickstarter campaign is that no matter how little you donate, you will get goodies in return. At different donation levels you get prizes ranging from copies of the e-book, copies of the paperback book, stickers, an original piece of art by me!, or you can even have yourself or your kid written into the third book in the series!  In many cases you would really just be donating the amount that it would typically cost to buy the book or e-book anyway. 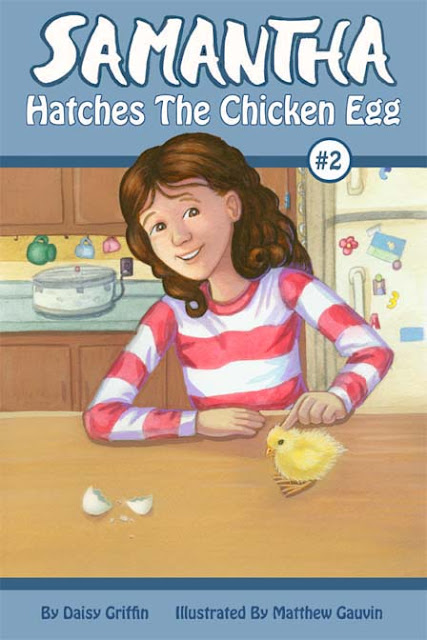 The sample below was my first draft of the cover on a grey scale layout. The author and I agreed that the background cupboards were too dark and her face was painted a bit too differently than the first book. So I adjusted those elements with guache as well as a few other tiny details. 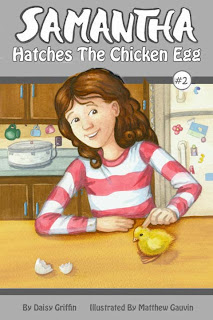 Below I've posted the cover of the first book in the series. Which is currently available as an e-reader on Amazon.com and elsewhere. You can click ont he link on the left of this blog to buy the book on amazon. 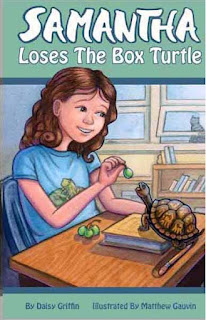 Posted by Matthew Gauvin at 12:08 PM No comments: 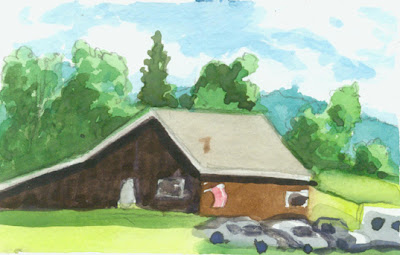 Over the past weekend I had a bit of time for a couple more small watercolor sketches. I'll probably be posting a few of these every so often. They are all are around 5"x6" and took about 15-30 min. In many cases I consciously simplify objects to favor having a finished sketch in my allotted time rather than a more detailed unfinished sketch.

Posted by Matthew Gauvin at 9:37 AM 2 comments:

It's time to chose the background layout color ! I've got fourteen options to start. Planning to get a general idea form these main options and then maybe tweak the color even more once the client sends me in a particular direction. I put the cover from the first book in the series at the bottom as a reference. 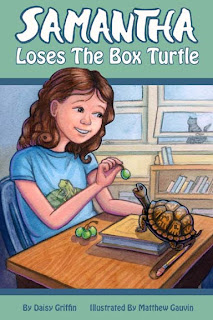 Today I finished off the rough draft of the final cover art for the second book in the "Samantha" Series authored by Daisy Griffin. 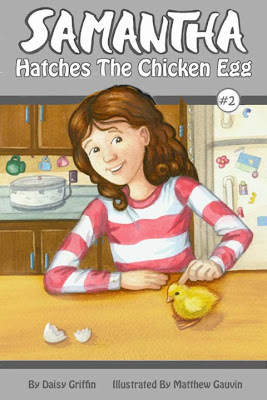 As the book cover is the most important illustration in the whole book I tend to start with as many thumbnail sketches as I can come up within a reasonable amount of time. Usually I shoot for ten or more. In this case we had a rough idea of the layout we wanted as we would keep in line with the first book in the series.

﻿This was a hard cover to narrow down as I liked number twelve showing the glowing light coming from inside the incubator, most people polled seemed to like number nine which I also liked, we then started with number eight which the author liked. Really I would have been happy with about half of these concepts. 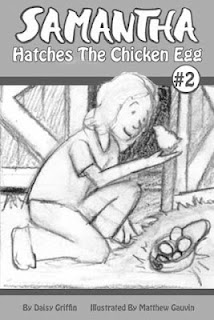 At this point the author didn't like seeing the eggs and a hatched chic in the same image and preferred number six. So I did a rough from that thumbnail. 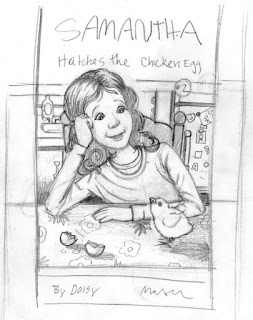 from here the author made More suggestions and we went into a more finished sketch. 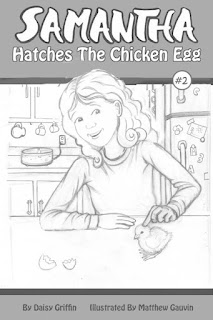 Then color samples and into the final art seen at the top of this post.
Posted by Matthew Gauvin at 12:59 PM No comments:

For more of my Vermont Landscapes got to :  Oil Landscapes   , Watercolor sketch 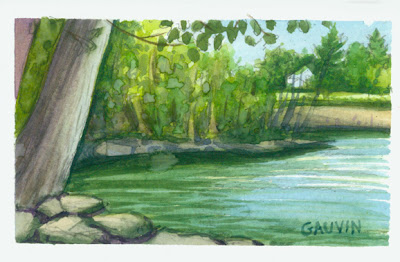 I spent the past weekend with my fiance at a friends camp in North hero Vermont, enjoying the summer. I found the time to squeeze in some small watercolor landscapes during my stay on the lake. I enjoyed it so much that I'm now considering spending a few days throughout the summer to make up a  ton of these miniature landscapes all over vermont and make a zazzle store specially devoted to vermont postcards, calendars and the like. I still hope to work in atleast a few oil landscapes this summer to have in local businesses and will likely make that  a priority, while doing these watercolor sketches when time is tight, perhaps some of them could become more finished oil paintings later. 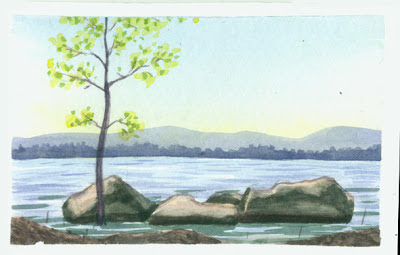 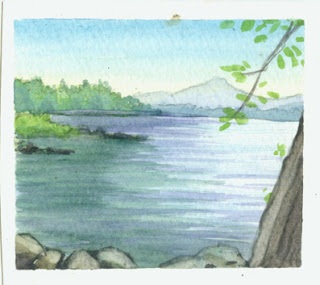 Posted by Matthew Gauvin at 6:00 AM 2 comments:

Over the past month I've enjoyed finally putting in some quality time with my new children's book " Pigs Under the Post office". We've designed characters and narrowed down to the final thumbnails and I'm hoping to have the final drawings done by the end of the week. 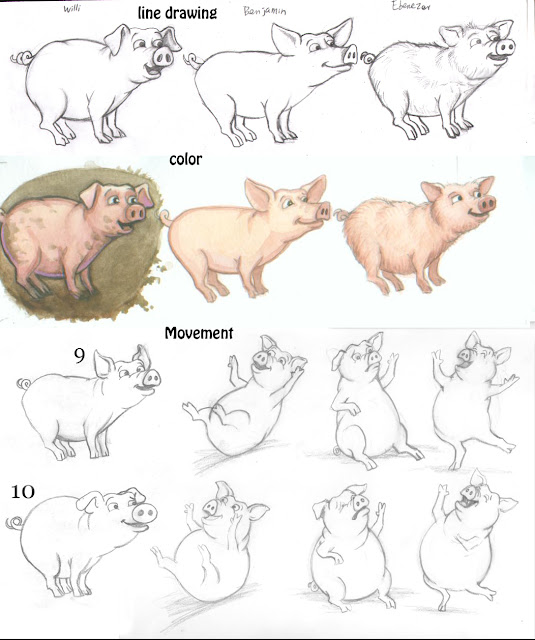 I did a bunch of thumbnail sketches for each  page of the book then the client and I chose the ones laid out below. 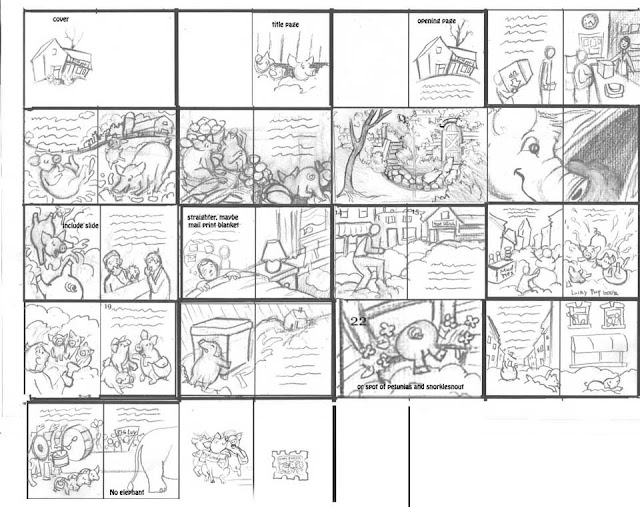 Posted by Matthew Gauvin at 6:14 PM No comments:

I've decided to try and bring my watercolors and sketch pad with me more often as I find myself away from the studio more and more these days.﻿ In my adventures with my fiance I've been in all sorts of places I would have loved to sketch or paint whether it be up in the backwoods on her four wheeler overlooking a beautiful farm scape at sunset, out on the water in kayaks observing the natural beauty of waterfalls and the powerful arched gnarly trees that lean out over the water, snowshoeing through snow laden forests and fields, or the long road trips that have carried us into many wonderful sunsets. I've seen more wild animals with her in the past few months than I have seen in my entire life here in Vermont. Moose, deer, foxes, raccoons, peacocks (well on a farm), rabbits, beavers, geese, fish and the like. So finally after many years as a practicing artist I've decided to get better at sketching. Here's my first go at it!  This is Biscuit who was kind enough to pose for me Saturday after a long day of helping Barbie at her weekend job. I'm thinking this was about a fifteen minute sketch, 4"x6" watercolor. 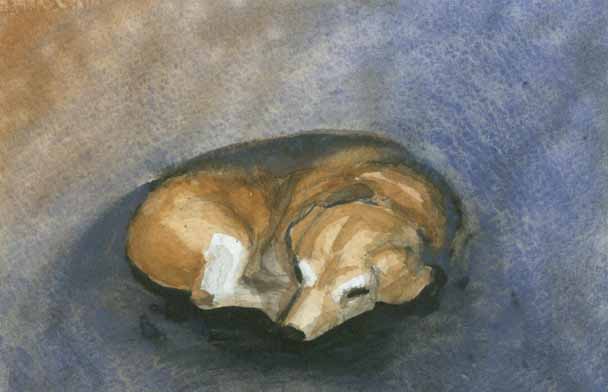 Posted by Matthew Gauvin at 6:08 AM No comments:

I don't really have much I wanted to say about these Bull drawings. I just wanted to post the finals since i posted some process work a few weeks back. The first set are of the male Bulls and the second are the female cows I illustrated last year for the same client. These aren't perfect by any means but I am pretty happy with them considering all that went into them. 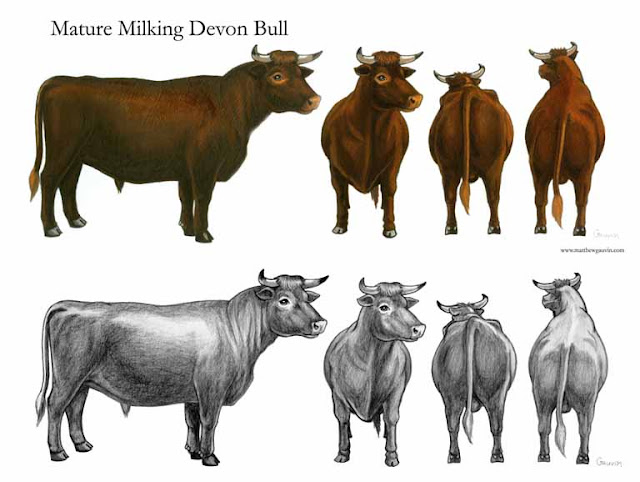 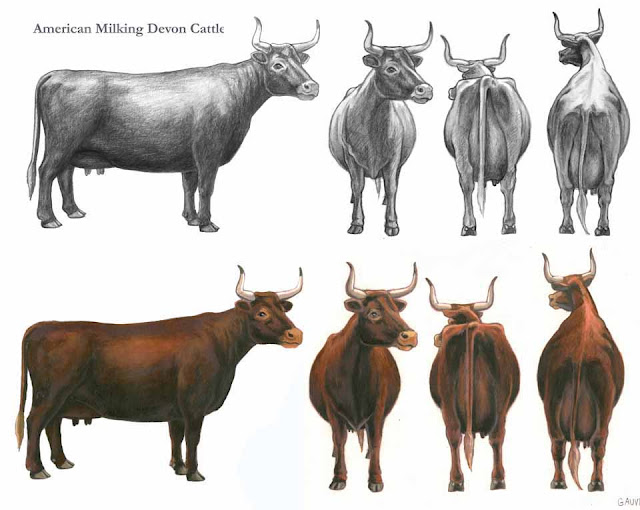 Over the past month or so I've brought  a few projects to completion and dug in deep with a couple of more recent projects. This BBQ logo design was started months ago so i was quit happy to finally bring it to completion.

First I did a finalized ink link drawing. 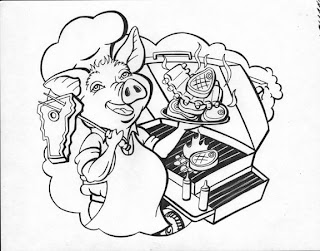 Then I did the final digital art. We originally wanted to use either watercolor or oil paint for the final but the client eventually decided they wanted to have the logo blown up large enough to go on the side of their concession truck. SO at that point I made the leap to digital art and discovered a way to vectorize the final art. More on that below. I did a few samples for the t-shirt design but mostly focused on the business card design as my starting point that would lead into the other product designs. 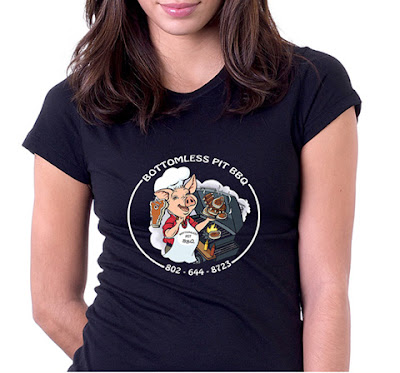 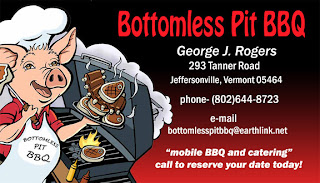 The business card design process involved many steps. It would take too much room to show all the process but I have a sampling below. Basically I did font samples, background color samples, layout samples. The client liked a cropped version on a  black background so i then refined that further with a few more ideas involving a gradient background color. 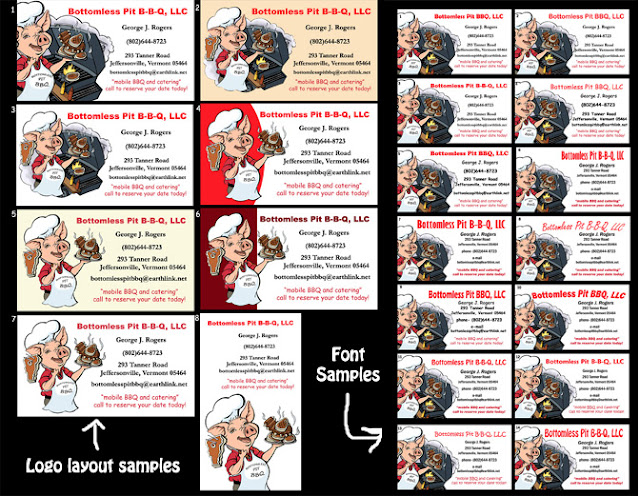 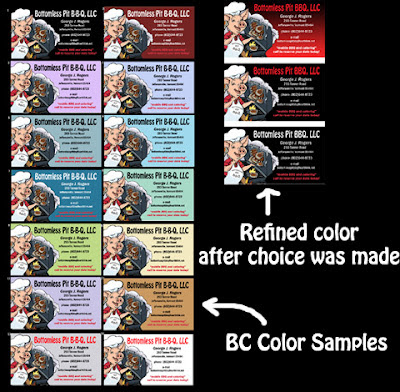 So to this point I had designed, business cards, t-shirts and product labels. Now I needed to take this art produced at a fairly small size and enlarge it to a really huge size without losing any of the quality. Typically an artist would create the original art in adobe illustrator as vector art but I didn't have the option available to me as I generally work in traditional mediums. So for this I turned to an online program called "vector magic". In my initial tests I immediately noticed the vector traced sample was horrible quality. The below image on left shows my original digital rough sample I did with shading. On the right is the vector file which shows harsh lines and shapes on the shaded areas instead of smooth transitions. 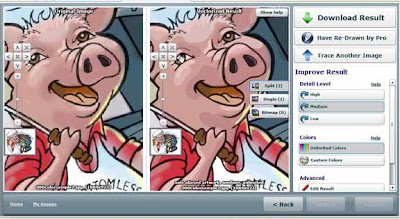 So I determined the best way to end up with a good vector was to do the original digital art with flat colors. This in the end  feel also lead to a better logo overall anyway as it simplified all of the forms and colors to the basics. 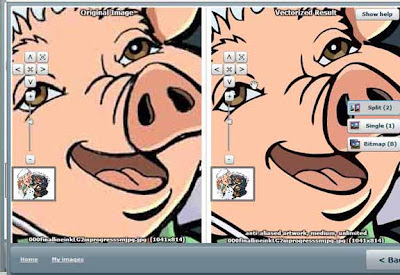 For those unfamiliar with vector files. Basically typical images are in pixel based formats which use small dots/pixels to display the image. Vector uses mathematical equations in the form of shapes of color to display images. So vector files are easily scalable without losing any of the quality. This logo as a vector file can now be enlarged as much as the client wants and it will keep its sharp lines. Pixel based images get blurry as they are enlarged.