Somehow I've managed to go three to four years without sending out any mailer postcards to publishers.  Well today is the day I broke with that trend and finally sent out seven envelopes filled with some of my more recent work. During senior year of College we were taught the importance of postcards and even more the importance of meeting with art directors in person in order to contract work. 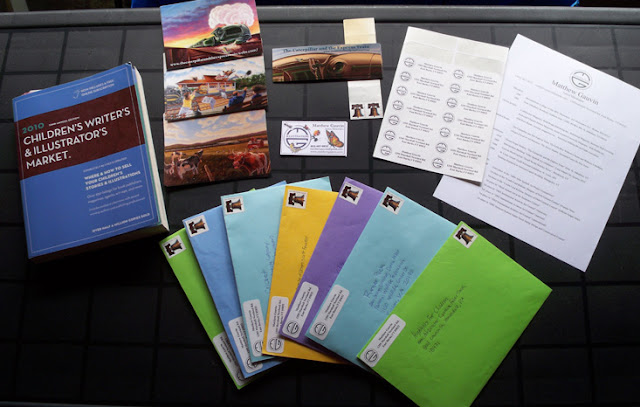 When I graduated college I suppose I had hi hopes that I would be lucky enough to catch the eye of some big name publisher and have it made. I didn't have a clue. I purchased one thousand!!!!! postcards for three different illustrations and I fully intended to send them all out to publishers in an effort known as mass mailing. It wasn't until years later that I realized how completely misguided my attempts were as I began to see how bad my art was waay back then. I think I sent out about 150 postcards before realizing the impossible task i had before me. The rest were eventually thrown away.

About a year later, I sent another round of postcards with artwork much better geared towards the children's book market. Eventually I began to realize that I needed to dig in and get my hands dirty actually making art and learning the specific field of children's illustration. At MassArt I had learned the basics of color theory and composition or how to paint nudes but I learned nothing about how to draw kids, how to design images to have room for text, or how to design characters that would remain recognizable from one pose to the next. These among other things I had to struggle to learn on my own over the past five years.

Soon after college I got a job to do a children's cd cover and got paid very decently. Then I found a logo gig and then another cd cover. This second cd cover turned into a job to do a full children's book! This to date is still my best paying job I've had in the life of my career. I did fully appreciate the job at the time but I suppose if I had known the full extent of what was to meet me in the following years, I would have found an even deeper level of appreciation for those clients who gave me my first real shot in children's illustration. From that point forward I worked for various clients full time and mailer postcards and the idea of working for publishers became a thing of the past. I illustrated eight children's books with three of those still not published and I currently have one more book on the way to the printers and two more in the process of being illustrated. I learned a ton of behind the scenes technical details about self publishing and at times I became a jack of all trades, master of none. I never really did figure out how to market books with no money to start off with.

So that was my five year goal since graduating. I planned to get books published and to build a large body of work that I could eventually feel proud to  show off to publishers. Now at the five year point I'm taking a good hard look back over my short career and am very thankful for all of my clients. However I now look forward to the future and realize that some seriously big changes need to come into play if I expect to still be working as a full time illustrator. So these seven packages of postcards are just the beginning of what I expect to be a long trying period of marketing directly to those who have the ability to keep me in business, as I embark on the journey of marriage and eventually delve into the adventure of starting a family.

I decided to start with magazines as they are the easiest market to break into. They are much more willing to try their hand with new talent because it won't make or break them if the illustrations don't turn out exactly as planned. In preparation for these mailers I finally went back and redid my resume and uploaded, to my website, about twenty new images from the past year. www.matthewgauvin.com I've got plenty of work left to do but today was an excellent start and I'm quit excited to discover what the future has in store!
Posted by Matthew Gauvin at 5:47 PM No comments: